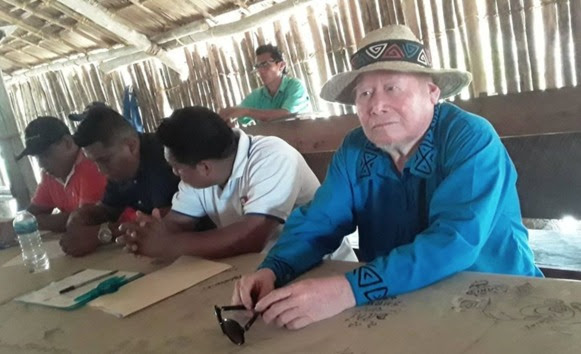 April 15, 2020, Tucson, Arizona: The International Indian Treaty Council (IITC), an Indigenous Peoples’ organization with hundreds of affiliates from the North, Central, and South America, the Caribbean, and the Arctic and Pacific regions, is profoundly concerned about the spread of the COVID-19 virus in Indigenous Peoples’ territories and the resulting loss of life and human rights violations.

Indigenous Peoples have suffered violations of their inherent right to health for centuries. Resource exploitation, destruction of traditional food systems and toxic contamination of Indigenous Peoples’ lands, air and waters cause disproportionate disease rates including cancers, diabetes, and asthma which compromise immune and respiratory systems among all ages. Poverty, overcrowding and long-standing lack of access to health care have further increased vulnerabilities. The current COVID-19 crisis is highlighting these ongoing human rights violations. The highest death rates are among Indigenous elders, who are the wisdom, language and knowledge holders for their Nations.

In the United States, the Diné (Navajo) Nation has been particularly hard hit, ranking third behind the states of New Jersey and New York in the number of cases per capita as of this release. Chile Yazzie, President of the Shiprock Chapter of the Navajo Nation is helping to coordinate community relief efforts. He stressed that “we [the Diné] have weakened immune systems because of our heart and respiratory conditions, which are caused in large part by breathing carbon polluted air from power plants all of our lives and living amongst abandoned uranium and massive coal strip mines. We live in a national energy sacrifice zone and because of our overcrowded housing situation, we are more susceptible to catch the virus.”

Panama’s Kuna have also reported growing impacts as well as the conditions that have made their sovereign Indigenous Nation vulnerable. On April 13th, Manigueuigdinapi “Mani” Stanley Icaza, advisor to the Kuna Youth Movement, reported to IITC that “our 50 Kuna Autonomous Communities are in quarantine in Panama. There are 20 cases of COVID-19 in Kuna Yala and many more cases among Kunas living in the city. Several Kuna Youth have passed away in Panama City. Our Wiseman and Leader Iguayokiler Ferrer is in the hospital in Panama City in an Intensive Care Unit. The situation is very complex due to the fact that there are no hospitals, no adequate health centers, no doctors, nor supplies in our territory.”

IITC is outraged that the COVID-19 pandemic has been used by some federal and state/provincial governments and corporations to roll back environmental safeguards and fast track development projects that Indigenous Peoples have long opposed. In Canada on April 1st, 2020, the Alberta Provincial government committed over 1 billion Canadian dollars for the construction of the Keystone XL Pipeline to bring tar sands oil from Alberta through the US heartland, committing to begin construction immediately despite the pandemic. This transnational pipeline is strongly opposed by Indigenous Peoples all along its route, as a violation of their cultural, environmental and Treaty rights. In March, the state of South Dakota along the proposed Keystone XL route adopted “anti-protest” laws expanding the definition of “critical infrastructure” to include oil, gas and utility equipment, and declaring “substantial interruption or impairment” of that equipment as a felony.

IITC has also received reports that attacks on Indigenous human rights defenders are increasing, including in Brazil, where deforestation continues unabated while the attention of the world is focused on the pandemic.

Now, more than ever, the rights of Indigenous Peoples must be respected in all efforts to address this crisis. This includes our rights to environmental and community health; Free, Prior and informed consent; and the right to participate in decision-making regarding the planning, development, and implementation of programs aimed to protect our Peoples and build sustainable, resilient and just post-COVID solutions. For our collective survival, IITC calls on the human family and the governments of the world to respect the rights and knowledge of Indigenous Peoples at this critical time. IITC will continue to oppose all attempts by governments and corporations to use this crisis to increase resource extraction, destruction of sacred sites, and contamination of lands, air, and waters that will further compromise Indigenous Peoples’ right to health.

To further this discussion, IITC will host a weekly series of webinars focusing on the COVID-19 Pandemic and the rights of Indigenous Peoples, beginning on Friday, April 25th. Upcoming webinars will focus on Food Sovereignty, Environmental Health and Justice, links between COVID-19 and the Climate Crisis, and the impacts of the pandemic on Indigenous women and children. More information on these webinars will be posted on IITC’s web site at www.iitc.org. IITC is also posting information received from Indigenous Peoples and UN bodies about the impacts of the COVID-19 pandemic.