Inicio>Blog>Sin categoría>Two Offices Focused on the Rights of Indigenous Peoples Will Open in Guatemala on July 23, 2021 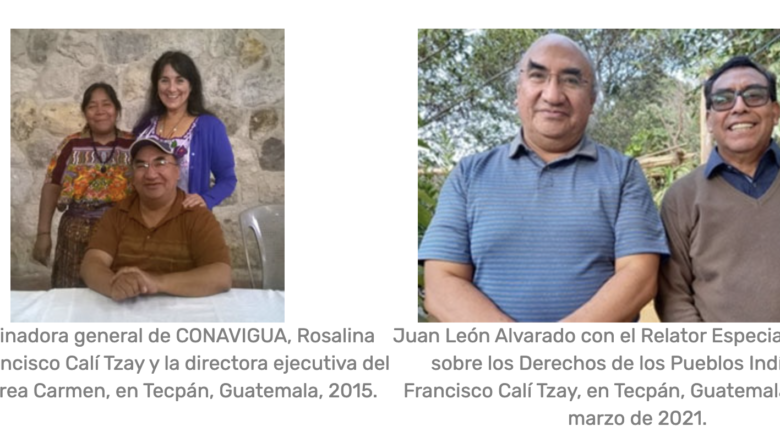 Guatemala City: On July 23, 2021, the International Indian Treaty Council will participate in the opening event for two offices in Guatemala, hosted by the Mayan Kaqchikel University in Santo Domingo Xenacoj in the department of Sacatepéquez. The office of the United Nations Special Rapporteur Jose Francisco Cali Tzay, who began his three-year term on May 1, 2020, will be located at the Maya Kaqchikel University and will provide a base for his work in his home country of Guatemala. The Special Rapporteur’s primary office will remain at the University of Arizona in Tucson Arizona, USA.

IITC is also pleased to announce that on the same day it will officially reopen its Latin America/Caribbean regional office hosted by IITC’s affiliate CONAVIGUA (the National Coordination of Indigenous Widows of Guatemala) in Guatemala City, focused on human rights advocacy. It will also provide capacity building, training, and technical assistance to assist Indigenous Peoples and organizations to present submissions and urgent action filings to human rights mechanisms including the UN Special Rapporteurs on the Rights of Indigenous Peoples and Human Rights Defenders, and Treaty bodies such as the UN Committee on the Elimination of Racial Discrimination and the Committee on the Rights of the Child.

The IITC Guatemala Office will coordinate and collaborate with the office of Special Rapporteur Cali Tzay, and provide support for his work upon request.

The events at the Mayan University will take place over two days. On July 23rd the IITC, the Mayan University, and the office of the Special Rapporteur will host a capacity building and training workshop for Indigenous organizations, attorneys, and educational institutions. The inaugural event for the two offices will take place on July 23rd, with participation of Indigenous leaders, Mayan authorities, dignitaries, and national and municipal officials, as well as spiritual ceremonies to bring blessings and unity for the work ahead. Both events will be webcast in Guatemala.

IITC President Ronald Lameman, Beaver Lake Cree Nation, represents over 240 Indigenous Nations that are members of Treaties 1-11 in Canada on IITC’s Board of Directors. He will attend and present at the events organized to inaugurate the IITC and Special Rapporteur’s offices along with IITC Executive Director Andrea Carmen and other IITC representatives from in and outside Guatemala. Ron affirmed the importance of these events and the reopening of IITC’s Guatemala office: “IITC remains committed to defend the rights of Indigenous Peoples in Guatemala, Central America and around the world. We look forward to working with our affiliates and other Indigenous organizations in Guatemala as well as UN Special Rapporteur to strengthen our collective voices for the well-being and survival of our Peoples.”

For additional information regarding these events or the work of IITC’s Guatemala office, contact IITC’s Guatemala Office Coordinator Juan León Alvarado at +502-42102584, or email to: juanleon@treatycouncil.org.

To contact the UN Special Rapporteur on the Rights of Indigenous Peoples, email to: indigenous@ohchr.org or FranciscoCaliRelatorEspecial@gmail.com.