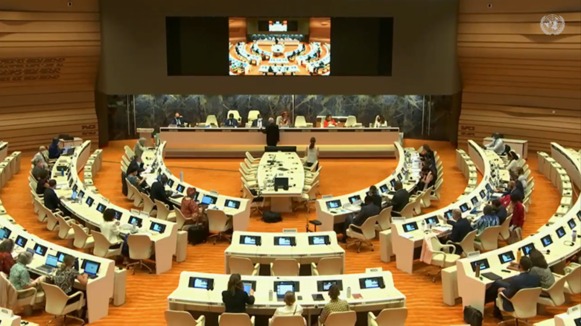 Some of its strongest language, the CERD called the attention of the U.S. government to the UN Declaration on the Rights of Indigenous Peoples as well as recommendations of the UN Human Rights Council that underscore how “Indigenous Peoples were victims of colonialism and continue to be victims of its consequences”.

The CERD called upon the US to “Adopt further measures to honor the treaties entered into with Indigenous Peoples and significantly strengthen consultation mechanisms with Indigenous Peoples on the implementation of these treaties, also with a view to settle disputes concerning land rights.” It also called upon the U.S. to “guarantee, in law and in practice, the principle of free, prior and informed consent, in accordance with the UN Declaration on the Rights of Indigenous Peoples and other relevant international standards.” The IITC had encouraged the CERD to address these core issues in its recommendations in both our written and in-person presentations during the review.

In addition, in the CERD’s previous concluding observations addressing the U.S. in 2014, the Committee used the term “indigenous peoples” without capitals. However, in its 2022 concluding observations, the CERD used the term “Indigenous Peoples” with capitals, an unprecedented and very significant advance in the recognition of our international status and standing by this UN Treaty Body.

Summer Blaze Aubrey (Cherokee & Blackfeet), IITC Staff Attorney for Human Rights, participated in the CERD review of U.S., along with Chickaloon Village Chief Gary Harrison, Laguna Pueblo and Diné Attorney, June Lorenzo, and Board member representing the United Confederacy of Taino People, Tai Pelli. She commented on the concluding observations and the very effective and united participation of IITC and the other Indigenous Peoples delegations, stating: “It wasn’t a surprise to me that the concluding observations strongly supported Indigenous Peoples and pointed to the multi-faceted ways in which we are discriminated against in the U.S. The Indigenous delegation was strong, and the strength of the delegation shines through in this report.”